With only seven months under her belt, Brady Wiseman has already snatched gold at Maties Sport as one of the High-Performance Interns.

The recent USSA Hockey tournament hosted by UCT gave Wiseman a better look into the background staff side of the sport.

Wiseman graduated with an honour’s degree in Sport Science in 2021 at Stellenbosch University but suffered an injury during her first year in 2018, which prevented her from participating in USSA Hockey or Varsity Hockey. Maties hosted the following year’s tournament, despite finishing second, it gave her the opportunity to compete in front of a Maties crowd.

The pandemic hit in 2020 and paused all sporting events which lead her to captain the Ladies’ hockey first team in her final year in 2021.

“It was very different experiences because in 2019 I was a junior and a newbie into the team, whereas last year I was captain and then this year I’m part of the management staff.”

“All three was kind of a progression, that’s quite funny actually because in 2019 we got bronze, 2021 we got silver and when I got into management in 2022, we got gold. Progression happened all the way through, but very different experiences.”

In hindsight it prepared her for the gold, although she would’ve liked to have received a gold medal as a player, she is grateful for the opportunities the sport has allowed her to have.

Wiseman and her colleague Amy Appolis assisted Llewellyn Morkel the head of Strength and Conditioning (S&C) Coach for Hockey (Men’s and Ladies). They divided things between them, where Appolis was with the men, Brady was with the women, and Morkel was working in between the two.

The Stellenbosch alumna is yet to figure out whether she wants to fully pursue strength and conditioning, “I’m still trying to figure that out, I think it is difficult coming out of university and studying and then going into something where you must know what to do. So, this internship has been good because I’m figuring out what I like and what I don’t like,” says Wiseman.

I’m starting to figure out that I might like the management and administrative side more. With the GAP’s project, we had to do a lot of administrative work and logistics, where your kind of under pressure all the time and you have to deliver, which I kind of liked.”

The GAP’s project is a Commonwealth programme that focused on supporting the development of emerging para-athletes and coaches. The camp connected peers in a holistic approach to gain knowledge through shared experiences and expert sessions. Hosted by Maties Sport in collaboration with Maties Sport Science, in April 2022.

Wiseman admits that she wasn’t as appreciative of S&C coaches when she was a player, “I said to the head of S&C Llewellyn, the team got through the whole tournament without any injury, and everyone was running, from both men and women’s at the end of the tournament.

I was able to congratulate him and realised how much of an achievement that is,” says Wiseman.

Morkel and the coaching staff have assisted and supported Wiseman with her responsibilities which were the warmups of the team and their morning activation when they wake up just to get them moving and going before game time.

“I wasn’t just like hanging on the outside, and doing what I needed to do, I was very involved in the team, and they trusted me,” says Wiseman.

The late nights, warmups, recovery massages, and sleepless nights were well worth the effort because the team earned the gold medal at the end! 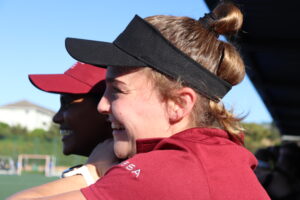