The 2022 Varsity Sports Festival recently took place at the University of Pretoria (Tuks). The five day event took place from 3 to 8 October and saw university teams from around the country compete for top honours.

The event also gave sports fans the chance to experience a variety of sporting codes and entertainment in one place.

During the weekend’s T20 Varsity Cricket Tournament, Maties managed to snag their first title against North West University (NWU) in a nail biting final. Despite the home ground advantage Tuks failed to reach the finals while Cape Peninsula University of Technology celebrated reaching the semi-final playoffs for the first time ever.

The Maties side also managed to win all their matches despite batting second  – a true testament to the skill and craftsmanship of the players.

The Maties team managed to reach their potential during the Varsity Cricket Tournament, according to Ryan Bailey, Cricket Head Coach at Maties Sport. “As coaches we paint the perfect picture and we see the capabilities of the players, but it’s the players that need to buy into that dream and bring it to life,” says Bailey.

Solid and consistent batting from the middle order batsmen throughout the tournament ensured that the team could recover momentum even if a top order player misfired.

Maties star batsman George van Heerden scored 207 runs in the tournament with a batting average of 51.8. 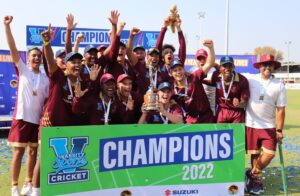 Despite the Maties team roster boasting five South African under 19 players – George van Heerden, Michael Copeland, Valentine Kitime, Ethan Cunningham and Kaden Solomons – Maties were off to a rocky start in the final as they only managed to break the opening stand of NWU in the 13th over.

NWU were pegged back by Maties in the second half of the innings as they reached 161/5 batting first.

Player of the tournament Benjamin Ward produced two crucial wickets and swung the match back into Maties’s favour. “Bowling spin in a Power Plus over can be nerve wrecking but [Ward] accepted the challenge and believed in his ability and planning.”

The Power Plus rule gives the batting team double points for any runs made during an over of their choice. “The Power Plus over [that Ward] bowled was the difference and ultimately played a role in us lifting the trophy,” says Bailey.

Maties comfortably chased down the total, finishing in style with a 6 from Don Glover to seal their victory in 17.3 overs.

From strength to strength

The 2022 cricket season will go down as one of Maties’ most successful seasons so far, says Keagan van Aarde, Sport Manager at Maties Sport. Both the high-performance program and the cricket club have been performing exceptionally well this year, according to him. “We can only go from strength to strength in the upcoming season and at the USSA Cricket in December 2022,” says van Aarde.

The team plans to start preparations for the USSA championships, which takes place at Tuks in December, soon. They will be drawing on the “happy memories” from their Varsity Cricket Tournament win as they get ready for another tough showdown.

The Maties team will be trying to uphold their “high standards set in the past” during their next performance at the Boland League. This will help them “prepare and plan for the [USSAs]” as the student athletes have exams in November.

The team will be focussing on the mistakes that crept in during the tournament in order to ensure that they are not repeated, according to van Aarde. “I am very excited for this group and what they can achieve.”

Van Aarde cites Maties’ win over Tuks as a Varsity Cricket Tournament highlight especially considering the history between the two teams”  and says that they expect the Tuks side to “come out guns blazing for us at USSA” but that Maties will be well prepared as always. 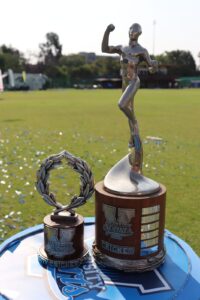