Maties Netball’s victory in the finals of Varsity Netball 2022 was the cherry on top of a historic season.

The Maroon Machine defeated North West University (NWU) 68-55 in the final on 17 October, in front of a sold out Coetzenburg Centre.

Maties were dominant throughout the tournament, remaining unbeaten on their way to victory.

Having finished top of the Varsity Netball log at the end of round-robin play with seven victories out of seven, Maties defeated the University of Johannesburg (UJ) 43-35 in the semi-final at the Coetzenburg Centre, before defeating NWU in the final one week later.

“It is still so surreal, I am still pinching myself,” said Zanele Mdodana, head coach of Maties Netball.

“It happened so quickly, but I am super proud of Maties as a whole; the netball team, management, players. Every single person contributed immensely to our success,” she said.

Mdodana referenced Maties’ loss in the 2021 Varsity Netball final to the University of the Free State.

“We were in this situation last year. So, we really had to buckle up and make sure that we crossed the finish line first this year. I think the team as a whole did a phenomenal job in making sure that we keep the trophy right here in Stellenbosch at Maties, so I am extremely proud.”

A highlight of the competition was how the team worked together so well, she said.

“Team management, the players – everybody knew their place. Everybody knew what was expected from them, what their contribution should be, and what role that each person plays in the team,” said Mdodana.

Maties played their first home game of the competition in the semi-finals against the University of Johannesburg. Previous games were played at either the University of Pretoria’s Rembrandt Hall, or at North West University’s amphitheatre.

“We were travelling for most of the competition, so we had a lot of adapting to do. We had to back each other, because we were playing away from home, and I am just proud of how everybody put the team first and not themselves. And that is why we ultimately achieved the success that we have,” said Mdodana. 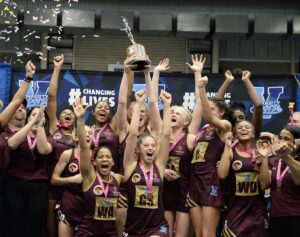 A Victorious Maties team after winning the 2022 Varsity Netball Final between Maties and NWU at the Coetzenburg Indoor Centre, Stellenbosch, SOUTH AFRICA